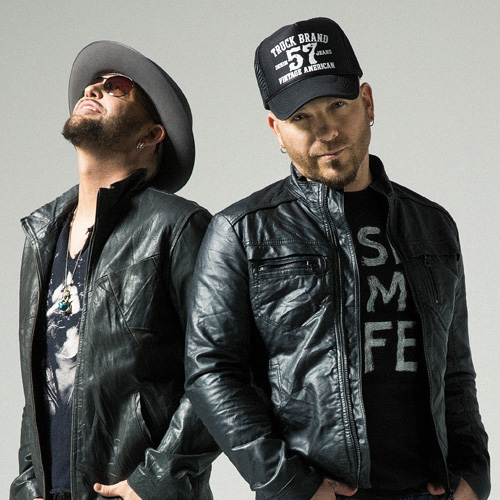 It’s an exciting time to be LOCASH these days. That might very well be one of the biggest understatements in Nashville these days. Already in their career, the duo of Preston Brust and Chris Lucas have enjoyed hit singles, sold-out concert appearances here and abroad, and have tasted the top of the chart as two of Nashville’s quickest-rising songwriters. But, to quote the old saying... You Ain’t Seen Nothing Yet.

Recently signing with Reviver Records, the duo is joining forces with some of the biggest names on the Country Music business landscape. Brust says they could feel the team’s energy from the first meeting. "We haven’t felt an energy like this since the day we began our journey. This feels like it has all come together –the right label head, the right promo team, it finally feels like we’ve got all of our ducks in a row for the first time in our lives. We’ve been out there doing the grass roots thing for so long, and to feel it all come together, is so encouraging."

As The LoCash Cowboys, the duo have made a presence at radio with such records as the feel-good anthem of "Here Comes Summer," and the tender emotions of "Keep In Mind," and "Best Seat In The House." With a new name, there is an underlying current of new and exciting energy, but the music is the same style their fans have come to know. "We’ve been doing this for ten years now, and I sort of feel like we have grown up a little bit in the business. We’ve matured in the business, and learned how it all works. We just wanted to simplify things and get down to the roots of what we are all about. That’s what LOCASH means anyway is remembering where you come from, and your roots. Because of that, we decided to go with LOCASH and just keep it real simple. Everybody calls us that to begin with. I think we’ll always be referred to as LoCash Cowboys out there somewhere, which is ok. That’s how we started."

That part together happened at Nashville’s Wildhorse Saloon, where the pair worked together in the club’s DJ booth. They talked about their influences – which range from Gospel (Preston’s great-uncle was Gospel legend Albert Brumley) to Rock and Roll bands such as Motley Crue and Quiet Riot. The two also talked about their dreams of a career in the business, which have come true beyond their wildest imagination – though they are far from done writing the chapters to their story.

An integral part of that LOCASH book is their songwriting. "I think that part of what we do reflects our different personalities, and what has happened in our lives," says Lucas. "The passing of my father was ‘The Best Seat In The House.’ Preston and I still write things like that. But, a lot of times, as songwriters, you get to go in someone else’s world, and try to think about what you would do in a situation. Some days, I feel like hearing something upbeat, and when there’s a lot of stuff going on in the world, we want to bring something a little fresh and make people want to roll down the window and smile. Then, there are songs that you have for when you’ve loved someone so much in your life, and you don’t want to let them go – like your wife and your kids, we have those songs too. It’s day by day what we write, and I don’t think any of that has changed. I just think the sound of it has evolved. We’re so excited to put it out so people can hear it."

The duo has seen their profiles rise in the business thanks to a pair of hit singles from two of the format’s most iconic voices. "I think having Keith Urban recording ‘You Gonna Fly,’ and giving us our first number one song really changed it all, and Tim McGraw doing ‘Truck Yeah' a few months later was huge to us as songwriters. That was his comeback single on Big Machine, and to be a part of that was a great moment," said Brust. And, the cuts keep coming! "We just got a cut from Joe Nichols," he continues. "I think our songwriting really adds value to what we’re about. Sometimes, as songwriters, you write hundreds of songs, and you never know if people are on the money with what you’re doing or not, and then all of a sudden, somebody like a Keith Urban, Tim McGraw, or Joe Nichols cuts your songs, and it just makes you feel that someone is really listening and they appreciate what you do. It’s a reminder of why you get up everyday and do what you do."

LOCASH has made believers out of Nashville, radio, and the corporate world, as well. They have earned endorsement deals from Dean Guitars, Under Armour and Mossy Oak apparel, Comcast, Bud Light, and Bowtick Bows and Crossbows, as well as Kicker Audio, who sponsored their "Livin’ Loud" tour. Their love of the outdoors has led to appearances on such lifestyle-oriented TV series as All Star Cast. Chris and Preston also believe in giving back to their community, by participating in such charities as D.A.R.E., St. Jude’s Children’s Hospital, and the T.J. Martell Foundation.

Other highlights on the LOCASH resume include performances on the TODAY Show, Jimmy Kimmel Live!, in Times Square in New York City on New Years’ Eve, as well as their debut at the historic stage of the Grand Ole Opry. Lucas also has great memories of taking their music abroad. "We have been able to take LOCASH worldwide. We’ve done some stuff in Germany and Switzerland, and we do a lot for the United States Military. Those shows always turn out to be some of the best shows we’ve ever done because when you’re overseas, and they don’t get the American music, it’s great to bring that to them. I’m an Army brat. My father, his grandfather, and great grandfather all were, and I’m the only one who didn’t. We really take advantage of every chance to perform for our troops, which is something we will always do. It’s a highlight not only of our careers, but also our lives."

All along the way, the group is mindful of those who have stuck with them since day one – the fans. "There’s ups and there are downs, but one thing about our fans, they are faithful and loyal whether you are No. 1 or last place on a chart," admitted Brust. "They don’t care what label you’re on – as long as someone is paying attention and wants to get the music out to them. That’s when they get fired up. They want to see us in the spotlight because they have stood by us for so long. There are days where we can get a little down sometimes, and the fans pick us up during a show, and make us want to keep on going down the road. I think they have fueled us as much as we’ve fueled them." That hunger for their music by the audience has accounted for (to date) ten million views on YouTube.

The coming year will bring the fans what they have been clamoring for – new music. And, with the ultimate All-Star team at Reviver in play, Lucas says that the future is bright. "We know we can make this new record deal very successful. We’ve done our due diligence. We have throw kindling all over the place, and it’s time to light it. We’ve got a lot of great fans and people who believe in us. I don’t think you can be in a better position than what we are right now. We have studied with the best, and 'For The First Time Ever,' we are confident that our songs and live performances are at the top of their game, so get ready to experience Livin’ Loud with LOCASH."