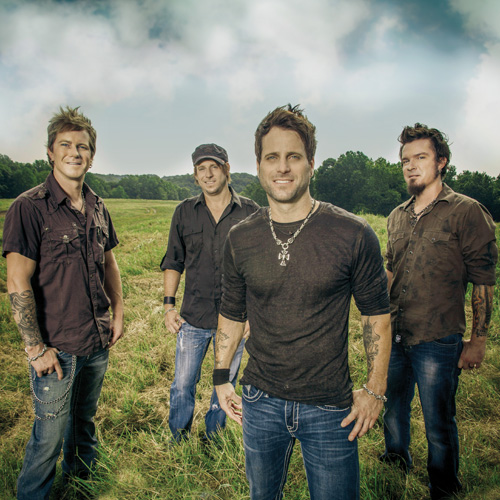 From a tiny town home to a gas station, two blinking yellow lights, and a small tin- roofed barn dubbed Studio B, country rockers Parmalee launched their long journey to Nashville. The near-fatal robbery Parmalee experienced after a show would have destroyed most bands. But brothers Matt and Scott Thomas, cousin Barry Knox and longtime friend Josh McSwain didn't call it quits. Instead it reinforced their intense motivation and dedication to one another and to their determination to succeed.

Parmalee’s country rock sound has its roots in the bluegrass, traditional country, southern rock and blues covers the guys grew up hearing their families play. Matt and Scott Thomas grew up near Greenville, NC watching their father Jerry front a popular local southern rock blues band. Barry Knox, who played drums for the church choir, loved what his cousins were doing and soon joined them. Barry learned bass in order to secure his spot in the band. The line-up became the newly minted The Thomas Brothers Band.

The Thomas Brothers Band cut their teeth on the local club circuit and would often share the same marquee with a cover band that starred their friend Josh McSwain on guitar and keys. A fan of Josh’s musical prowess, Matt invited Josh to play with Barry, Scott and himself. The foursome clicked immediately on stage. Their first gig was held at local watering hole, Corrigans, near East Carolina University where the guys went to school. From this moment in 2001 Parmalee was born.

All of Parmalee’s hard work, dedication and perseverance is paying off in a big way. Country fans voted the band’s debut single, "Musta Had A Good Time," #1 for 4 consecutive weeks on SiriusXM’s The Highway "Hot 30 LIVE" countdown and the song became a Top 40 hit on mainstream country radio. MTV Networks also hand picked Parmalee to perform as part of its 2013 O Music Awards.

Parmalee recently made history when its multi-week #1 smash "Carolina" became the longest climbing single by a duo or group in the 24-year history of the Billboard Country Airplay Chart. "Carolina" was recently certified GOLD (for over 500,000 in sales) by the RIAA.

Parmalee’s debut country album, FEELS LIKE CAROLINA, has earned critical praise from People, The New York Times, USA Today, Newsday, Billboard and more. In 2014, Parmalee earned a semi-finalist nod for the Academy of Country Music’s coveted "New Artist of the Year" award and a 2014 Teen Choice Award nomination for "Choice Country Group" Parmalee’s hit, "Close Your Eyes," became its second consecutive Top 3 hit at country radio. In 2015, Parmalee hit the road with Brad Paisley on his "Country Nation World Tour," kicking off Jan. 17, 2015 in Morgantown, WV. The band’s new single, "Already Callin’ You Mine" impacted country radio on Feb. 2, 2015 and is still climbing the charts.