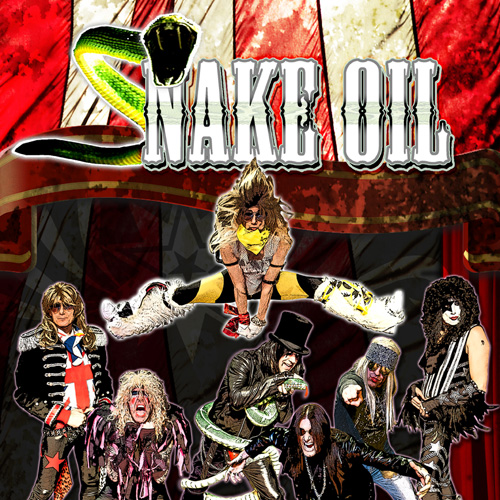 It’s the classic rock music you love... and you can’t get enough of it. Are these rock icons the real thing or is this Snake Oil?

This is not a tribute band! Snake Oil's musical cast not only look like the rock stars they portray, but they use their own natural voices to perfectly impersonate the singing and speaking voices and stage mannerisms of these rock icons. Snake Oil's live theatrical shows are known for their impeccable authenticity to the original artists' recordings, with spectacular costumes, hilarious audience interaction and an array of incredible special effects. Snake Oil has an outstanding cast of world-class accomplished musical artists, talented singers, and technical support to ensure an authentic 80's arena-style rock show experience.

Warp back to a time with the lost art and attitude of real 80's rock. The kind of costumed and propped rock show that filled and shook the arenas and stadiums of the world; The Hair Rock, Melodic Rock, and Classic Rock you love, fueled with energy, fun and sprinkled in humor, these guys are good, real good.

The rock icons portrayed on center stage are supported by Snake Oil's stage characters; Due, Roxxx n'Hammer, JIZ, G-Spot, Ryan Coke and Koz. These are 6 rockers from different parts of the world, who met purely by chance backstage at a rock festival in Leeds, England. Three of them hit it off right away, two of them didn't, and 1 still doesn't remember. However it was determined that they all had the same musical aspirations. From Muff Ireland, Detroit Michigan, Denver Colorado, Kokkola Finland, Winnipeg Canada and 1 doesn't remember, this unit is guided by one thing. The spirit of the rock n' roll party and everything that goes along with it. Your audience is guaranteed a good time!