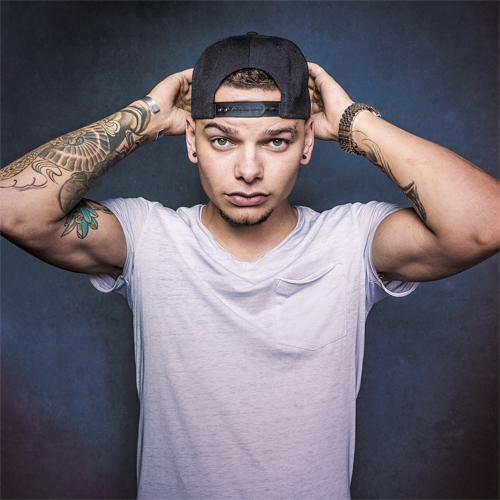 Kane Brown was just a shy teenager when he began posting videos of himself singing cover songs online. Growing up singing Shania Twain and George Strait in the car with his mom in hometown Fort Oglethorpe, Georgia--a small town just outside of Chattanooga, Tennessee--the classic country songs he covered were comfortable territory for the young singer, whose deep drawl will immediately garner comparisons to Josh Turner and Chris Young. It wasn’t long until his audience online far outpaced what he would find on stage: when his cover of Lee Brice’s "I Don’t Dance" racked up 60,000 shares, Brown began to find his following had become its own community, interacting with his personal posts while becoming a sounding board for snippets of original music, too. That immediate relationship with the people who are responding to his music has taken debut single "Used to Love You Sober" to the top of the iTunes Country charts, selling over 255k downloads of the song and garnering more than 3 million streams on Spotify. His freshly-released EP Chapter 1 saw similar successes, claiming the No. 3 spot on the Billboard Country albums chart and hitting the top of the iTunes country and overall albums chart. Brown co-wrote four of the five tracks on the EP, listening to fans’ feedback as he selected which tunes to release, and celebrated its success with a string of instantly sold-out shows, a triumph for a performer who found his first fans from his bedroom.

"The only time I would want to anybody hear me sing was if I was singing with a big group of people—or if I was in the shower by myself," he says of himself just a few years ago, when he was another voice in his high school choir. But once his cover songs began racking up views, transitioning into songwriting was a natural next step.

"I write about pretty much what I feel," Brown shares. "Country music is stories," he says. "As long as the words are meaningful, and people can understand what you’re talking about and feel it, that’s a good lyric."

Brown’s Chapter 1 EP is a long-awaited milestone for the millions who have watched Brown grow into himself as an artist online, but its five tracks will make a fitting introduction to new fans, too. Chapter 1 opens with "Wide Open", a pedal-to-the-floor favorite about making fun from empty parking lots and back roads. "Excuses" laments the gradual downfall of a relationship gone sour while "There Goes My Everything" represents a high point on the release as the young writer finds his voice in the love song through storytelling and rich imagery. Early fan favorites "Last Minute Late Night" and "Used To Love You Sober" round out the record, highlighting Brown’s signature baritone voice.

Now, the way that the once-shy Brown engages with fans from the stage is as natural as the back-and-forth he maintains through the screen, waving and locking eyes with concertgoers with the same animated enthusiasm that he takes in replying to individual comments and followers online.

"They know everything about me; my personal life, my mom, my nana, my favorite color, my favorite foods, my favorite super hero," he says, and that closeness is obvious in the live stetting. "When I know it’s a good show is when there’s a good sound; the crowd, they’re singing your songs right back at you. You leave with even more energy than what you had when the show even started."

As Brown gears up for a landmark year--including dates with Florida Georgia Line--anything seems possible, but one thing is certain: millions of fans will be along for the ride.