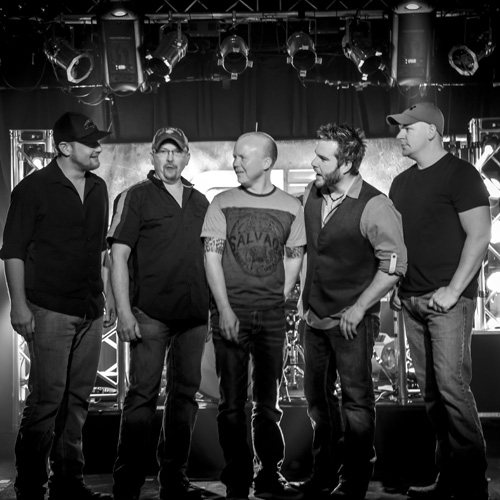 Redline is Fargo's hottest new country band that is taking country to its limits. Former member of 32Below, The Roosters, Face For Radio and Fat Daddys have come together to bring a fresh, new country feel to the region. Redline's high-octane sound will leave you wondering where they get the energy. Raising the bar on what country music can be, Redline is a must see show every time!

Lead guitar is his weapon of choice, love is the game he plays. Setting the tone with his experience and sound that has become familiar on the Fargo/Moorhead music scene, Mike Anderson brings a level of experience to this group that many would be hard pressed to find. Playing with bands such as "The Sheyenne River Band" and "Work Release", Mike is most noted for his time with the popular regional band, "The Roosters". Mike was an important piece in helping them reach a very high level of popularity, and he is primed and ready to show these "young'ns" that there is still a lot left in the tank!

Ladies, come sit on his monitor. Slapping the bass is only the beginning of his talents, and he is ready to show that there is more. Nathan Stang also brings experience that is very hard to match. After spending 10+ years with regional powerhouse "32Below", Nathan helped lead them to national recognition where they were turning many heads. Nathan has widely become known as one of the most talented song writers in this area. From his catchy hooks to his inspiring ballads, Nathan's words have captivated audiences around the US. After writing such hits as "Kickin' Back", "Quit Coming Around" and "Make a Little Noise", Nathan's arsenal is still full of many catchy tunes that Redline will put on display!

Also check out the many graphics you will find on our website and at our live shows....that is right, all done by the hand of Nathan.

Here comes the BOOOOOM! Setting the tempo and laying down the groove for Redline, Ben Luckason is no easy man to forget! He brings a feel for the drums that makes you wonder if he had drumsticks inside the womb. Ben has spent the last 4+ years drumming for the local variety rock band, "Face For Radio". They gained a very big fan base in the Fargo/Moorhead area, and Ben is ready to help build the Redline fan base to that point and beyond. Make sure to make it to a live show... to see is to believe when it comes to the beats that Ben will lay down!

"You showboatin' son of a..." Bringing an energy to the band that is unmatched in the Fargo/Moorhead country music scene, Brett Pauly is an atomic ball of vocals and dance moves that will leave you in awe. From a smoothe-as-molasses voice to a stomp that doesn't quit, Brett spent the last 2 years with "The Fat Daddys Band" as their frontman. Brett also won the "2010 Fargo Star", but he is prepared to show he is more than just vocals and dance moves. The acoustic isn't just on stage for props as Brett is ready to strum your hearts out ladies. Showboatin' or serenading, Brett will entertain!

Mike, Nathan and Brett have been playing together for the past year in The Fat Daddys Band, but once their drummer decided to retire, they knew it was time to move on and retire the Fat Daddys name. And so, they became REDLINE. It was a long, hard search, but they finally found Ben. They knew it was a fit right away, and they are prepared to show you why! Country music has been redefined many times over the years, and Redline is ready to show you that they will push it to the limit!